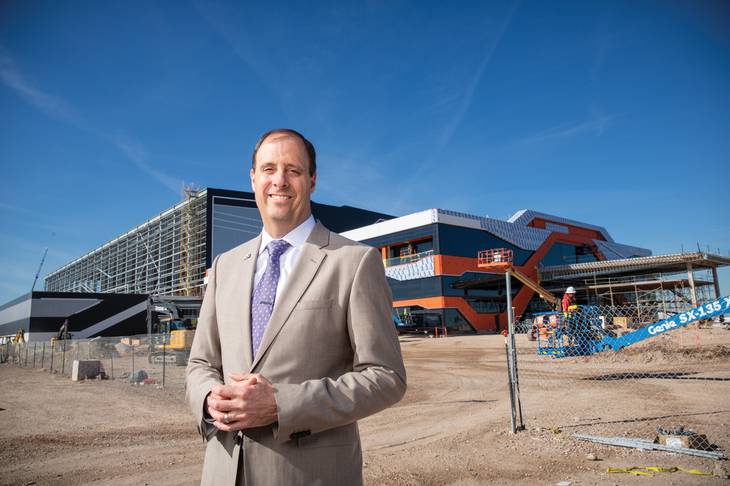 As president and CEO of the Henderson Chamber of Commerce, Scott Muelrath is no stranger to construction sites. Wherever he is in Henderson these days, Muelrath typically isn’t far from a building project.

This day, he’s at the construction site for the Las Vegas Raiders’ headquarters facility near St. Rose Parkway and Executive Airport Drive.

“It’s a busy time—the relocations of businesses to Henderson and Southern Nevada as a whole, but also the growth of companies that were already here,” Muelrath says.

The 320,000-square-foot facility—which will be known as the Intermountain Healthcare Performance Center—will feature indoor and outdoor practice fields, office space and a full athletic training center. The complex is expected to be finished in early June, according to Raiders President Marc Badain.

But that’s just the start of things in busy Henderson. Across the city, backhoes, cranes and other heavy construction equipment dot the landscape. There’s the new Vegas Golden Knights ice center going up on downtown’s Water Street, a massive Amazon fulfillment center under construction on the west side, and the Union Village development—which includes Henderson Hospital—just east of U.S. 95 near Central Church. Google last year broke ground on a $600 million data center near Warm Springs Road and Boulder Highway.

Plus, there’s the planned 2.4 million square feet of manufacturing space for California company Haas Automation, which plans to break ground on three buildings this spring, according to city officials. Haas purchased 279 acres in west Henderson from the city last year.

“If you look 18 months forward from now, there’s not a more compelling footprint of economic development and diversification in the entire state than what’s going on here in west Henderson,” Muelrath says. “We know about the Raiders facility, but right next to it is the Turano Baking Co. facility, which just recently opened, all these industrial projects that have sprung up and then you have the Smith’s distribution warehouse,” he says.

Muelrath says the planned Haas Automation complex might end up as the biggest prize of them all. Over the next decade, it’s projected to create 2,500 jobs with an average annual salary of $64,000.

Based in Oxnard, Haas is one of the largest machine tool manufacturers in the country. It specializes in making motorized and maneuverable tool machines.

“The city has worked very hard to make that happen,” Muelrath says of bringing Haas to Henderson. “That will bring over high-paying engineering jobs from outside of Nevada. That’s a 10-year phase-in, but they’re going to start moving dirt in just a matter of months.”

Amazon, meanwhile, is on track to open its fulfillment center later this year near the new Raiders headquarters—and create about 1,000 full-time jobs, according to company spokeswoman Lisa Guinn. “We are thrilled to be part of the Henderson community and look forward to building relationships and being a good neighbor for years to come,” Guinn says.

“Some factors we consider when selecting a location for an Amazon facility include a dedicated workforce and great local support. We’ve found both in the Las Vegas metro area,” she adds.

Windom Kimsey, president of TSK Architects and chair of the Henderson Development Association, says west Henderson and the downtown Water Street District are “the two shining stars for growth right now. It’s unbelievably exciting,” he says. “I couldn’t have predicted what’s happening now. I don’t think anybody could have.”

In 2018, Henderson city leaders were in contact with officials from the Arizona Diamondbacks about the possibility of bringing the Major League Baseball team to Nevada’s second-largest city.

Though that effort ultimately didn’t pan out, Kimsey says “a lot of things are out there that Henderson could potentially capture. The ultimate goal is to increase the value of Henderson as a place to live.”

Says Muelrath, “What we’re hoping for is a measured, consistent pace of growth. At times, that growth has been moving pretty darn quick. That said, it’s go time.”