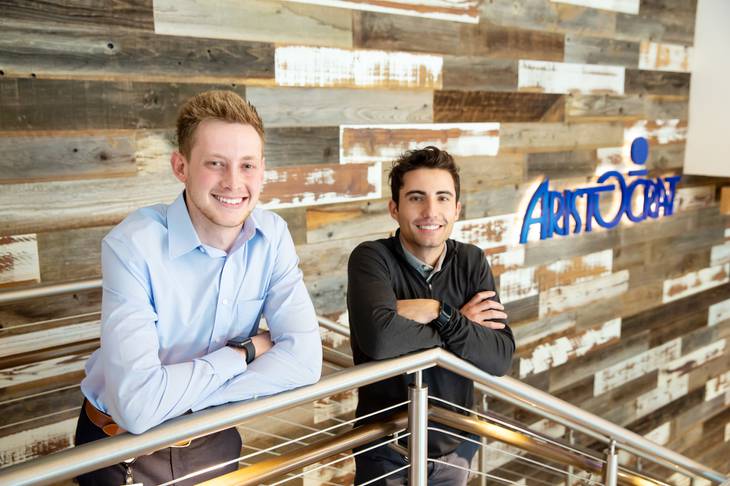 Powell—a former standout baseball pitcher at Centennial High School and later at UNR, where he graduated in 2019—was set to interview for a marketing position with slots manufacturer Aristocrat Technologies at the company’s millennial-centric, year-old Las Vegas campus.

“When I came here for my interview, I was blown away,” Powell said. “I didn’t even know spaces like this existed in the gaming industry. It’s like something you’d see in Silicon Valley or in Southern California.”

Partly because of the company’s impressive campus, Powell, a marketing specialist, accepted a job offer and started in August.

On a typical day, Powell, 24, eats lunch at the Aristocrat cafeteria—the shrimp bahn mi was the featured lunch special on a recent Wednesday—and exercises at the campus gym after work.

He typically doesn’t take advantage of the free sessions at the on-site yoga studio, but they’re available if he ever wants to.

The Aristocrat campus, which opened late in 2018, isn’t your father’s office complex. It’s the type of workspace many say companies need to attract employees in their 20s and 30s.

In place of offices and rows of identical cubicles, the twin buildings that make up the 180,000-square-foot complex feature open seating and standing work areas with natural light pouring in.

Lounges and kitchens are designed to allow employees to interact, bounce ideas off one another and develop friendships. There are also quiet rooms, a Starbucks coffee shop and a game area with a pingpong table.

“There’s a much more diversified employment base that’s growing in Southern Nevada right now,” Stuart said. “There’s a flight out of hostile business environments such as what we see in California. It’s a net positive for Southern Nevada, but the other side is that, to get the area competitive with other cities in the Southwest and the intermountain region for talent, Las Vegas has to cater to the millennial and Generation Z workforce.”

Stuart, one of the main developers behind the Town Square district, said that means creating community-based and amenity-infused workplaces like the Aristocrat campus at the 215 Beltway and Flamingo Road.

Stuart and his partners at Matter Real Estate are behind the $400 million UnCommons development, which is being designed by global architecture firm Gensler and is planned for 40 acres near Durango Drive and the 215 Beltway.

Officials expect to break ground on the development, which will include 500,000 square feet of office space, retail space and hundreds of residential units, later this year. The first phase should be done by the middle of next year.

Many companies have decided to move away from what Stuart calls “soulless office environments.”

“The great workplace environments in the U.S. today are not tall, steel- and stone-clad buildings,” Stuart said. “They’re wide open and flooded with daylight. They have a cool vibe and energy about them. It’s completely different than what we’ve historically built.”

Long viewed as an adult playground for gambling and partying, Las Vegas, with a metro population of about 2.2 million, is welcoming new residents and young families in droves. It has pro sports, burgeoning family-friendly suburbs and a small—but developing—tech sector.

“Las Vegas, perhaps for the first time, is being taken seriously as an up-and-coming city,” Stuart said. “Pro sports certainly helps. Las Vegas is also becoming more about experiences and less about gambling. That said, young people still need to view Las Vegas as a cool, funky place to live.”

Duncan Paterson, an LA-based mixed-use specialist with Gensler, said young people often choose where they want to live, then figure out their job situation. That type of thinking, he said, marks a night-and-day change from the baby boomer generation.

“The world, in every profession, is in a talent war,” Paterson said. “You want the best people in your company and you want them to stay. The joke is that people move to New York to make it on Wall Street, move to Los Angeles to make it in Hollywood and move to Portland to move to Portland. When given the choice between two similar jobs, people are choosing the one that gives them the best lifestyle.”

Jonas Peterson, president and CEO of the Las Vegas Global Economic Alliance, said it’s important for employers to recognize what millennial workers are looking for. “Millennials are one of the fastest-growing segments of our workforce in Southern Nevada,” he said.

Back at the Aristocrat campus, Powell, the former baseball star, reflected on the way his company presents itself to its employees.

“Every decision that I’ve seen has been geared toward the employee,” Powell said. “My dad came here for lunch recently, and he stopped at one point and said, ‘I just want to say, you hit a home run. You don’t know how good you have it.’”