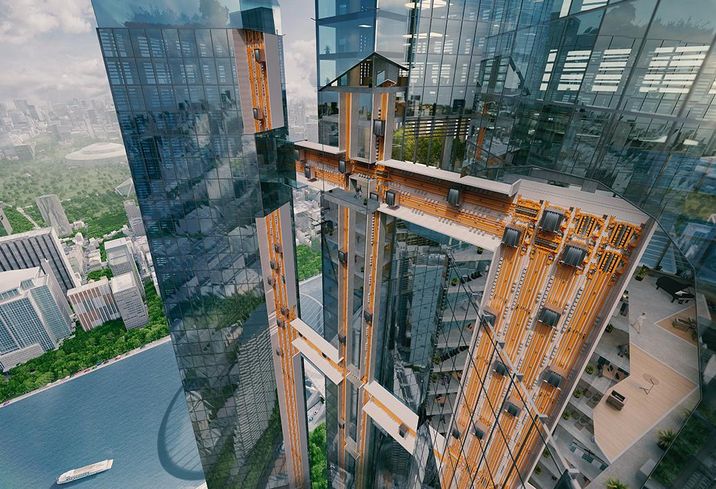 Elevators and escalators get little fanfare in the commercial development space, but some new technology may make you sit up and pay attention. From cable-less elevators that go every which way, to escalators that spiral up to top floors and elevators designed exclusively for use by robots, the future is on the rise. Thyssenkrupp Elevator’s MULTI elevator system design will allow elevators to move horizontally and vertically within buildings without ropes or cables. Multiple companies are working on new technology that will make escalators and elevators more space-efficient and cost-effective. Among the most eye-popping is Thyssenkrupp Elevator’s testing of cable-less, multidirectional cars that move both vertically and horizontally through elevator shafts.  Thyssenkrupp’s MULTI product is the world’s first rope-free elevator that moves horizontally and vertically through and between buildings. While traditional elevator systems rely on hanging cables or hydraulic systems underneath to gain lift, MULTI moves through the power of magnetic levitation much like train technology, Thyssenkrupp Elevator Head of Digital Services Jon Clarine told Bisnow.  This design allows builders to remove restrictive cables and place more cars into a limited number of shafts, thereby preserving valuable square footage.  “Obviously with multiple cars in a single hoist way, you can move a lot more people, which drives efficiency for the building,” Clarine said. “So now you can have more cars going in and use less hoistway. That’s one of the huge advantages.” While one such use is to transport passengers horizontally — perhaps between buildings and down long passageways — Thyssenkrupp says the ideal use is an office tower that wants to save time and space when moving large loads of passengers up and down.  “We can connect hoistways. And with the ability to move sideways, we can effectively have two hoistways operating much like a Ferris wheel going around,” Clarine said. “And as one comes down, you can move to the other hoist way and go up.” Elevator North America Thyssenkrupp Elevator’s AGILE elevator enhancement package provides buildings with faster and improved elevator performance. While a number of end users could take advantage of the horizontal elevator’s capabilities, Clarine sees a definite need for them in urban environments riddled with tall skyscrapers and loads of elevator traffic.  “At the end of the day, the main goal here is shaft efficiency which provides more rentable and useful space to our customers,” Clarine said.  One of the underlying benefits of the MULTI system, which is still undergoing testing in Germany, is that it operates without cables and can reach almost any vertical height.  “One of the limiting factors for [establishing] heights of buildings … is the elevator system,” Clarine said. “The elevator itself when it’s attached to a rope can only go so far. With the MULTI’s removal of the ropes, the height of the building is no longer limited by the elevator system.” The TWIN elevator system from ThyssenKrupp operates two elevators in one shaft. Another game changing technology in the elevator space is already live in Atlanta. Thyssenkrupp Elevator’s TWIN elevator system is now operating in the 21-story Coda building inside the Southeast city.  With five shafts, the system is able to operate two independent cars inside one shaft, cutting back on the amount of space used while transporting about 40% more passengers, the manufacturer said.  The elevators share the same rails and doors, but they operate independently, freeing up square footage for other development.  Thyssenkrupp says its technology empowers robots to run elevators on their own. Thyssenkrupp Elevator is marketing another tech tool that allows elevators to communicate directly with on-site robots as part of the company’s artificial intelligence revolution. “We have recently released a programming interface that quickly allows our elevator systems to communicate with some robot vendors and easily integrate with others, so robots can call an elevator and go to the floor where they are going … and the doors open and permit that transport,” Clarine said.  This type of tool could prove effective in hospitals or hotels where service robots are routinely called to different sites.  Clarine is aware of one hospital in the Atlanta area where AI-compatible passenger cars already exist exclusively for the transport of robots. For those developers who prefer open-air options for transporting passengers (or even robots), Mitsubishi Electric has a spiral escalator on the market for the world to see. The escalator, which is already featured in Chicago’s 35K SF Starbucks Reserve Roaster site, allows visitors to ascend to higher levels, as if they are levitating in thin air while overlooking the floors below.